In the early 2000s, close to 68% of the Twin Cities metro area was under age 34. And less than 1% of these 2 million young people went to church on a weekly basis.

"When I read the research," said Peter, "it kind of felt like Christianity in the Midwest was dying on my watch. And with the Twin Cities being one of the epicenters of education, I kept praying: 'God would you raise up new churches who will reach the Twin Cities?'

And suddenly, the Lord impressed upon my heart: 'Don't pray for solutions to problems that you aren't willing to personally solve." 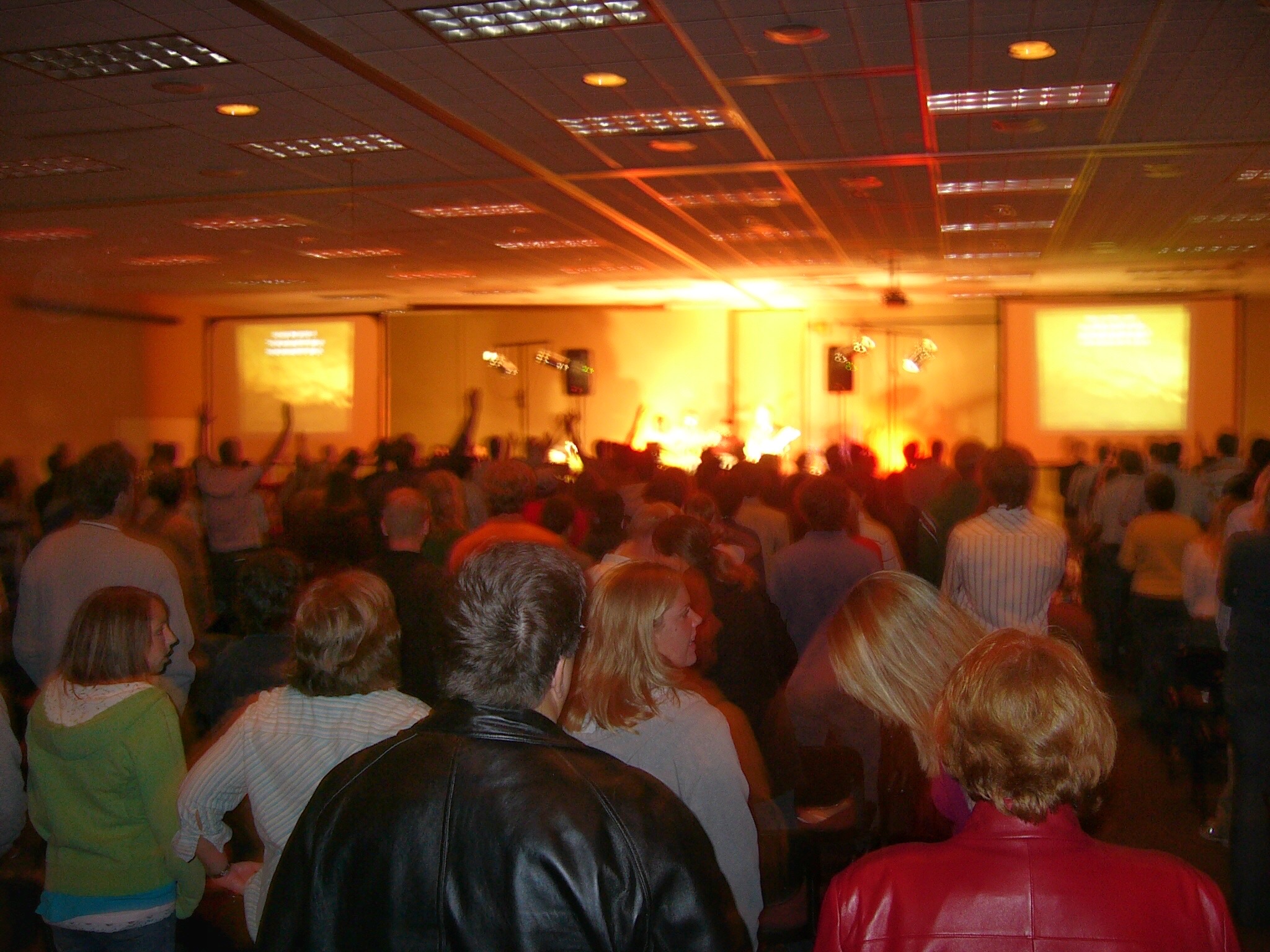 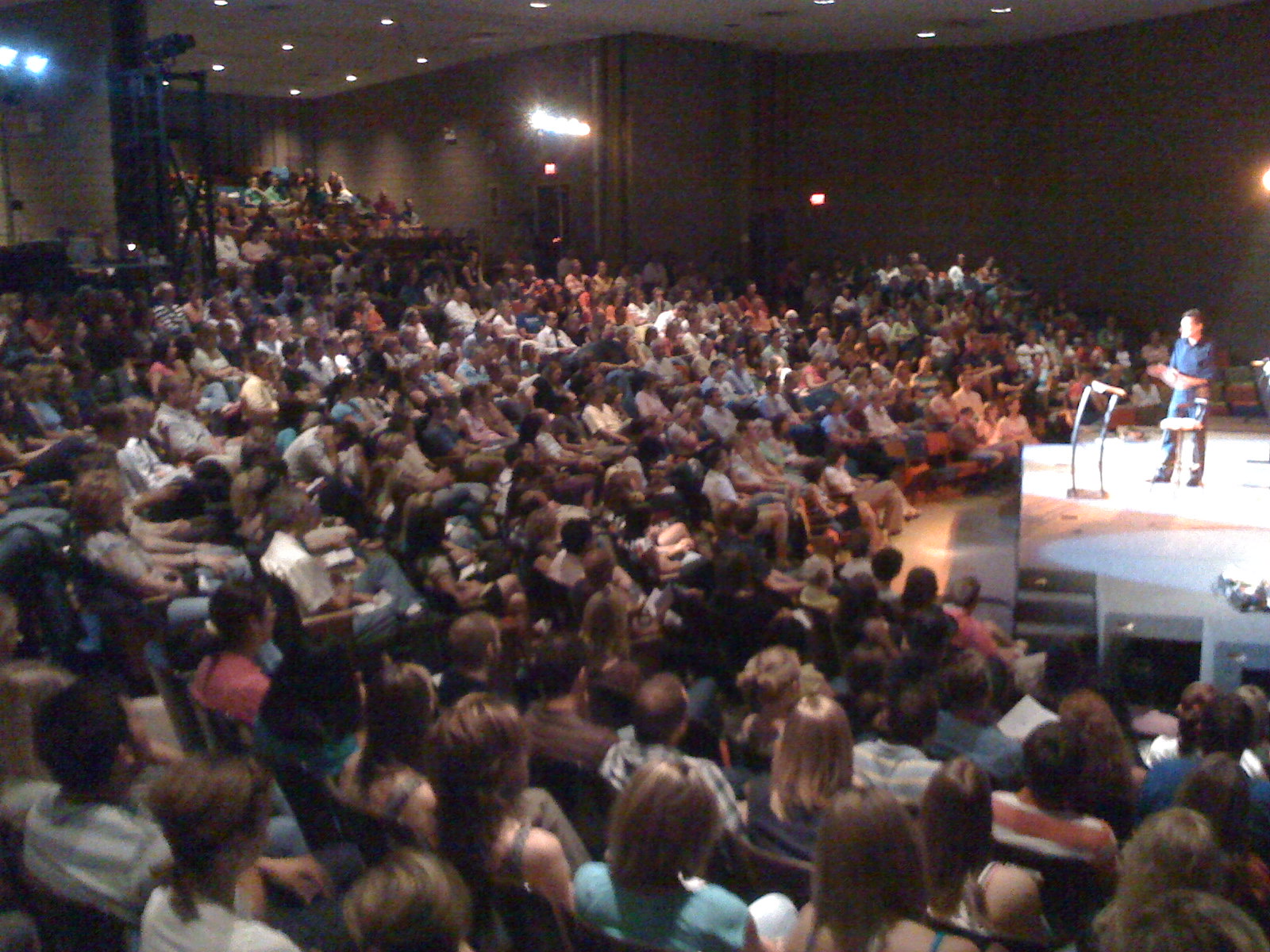 After slowly growing to 3 services at the U of MN, Peter and the team were on a constant search for a bigger facility. After researching over 50 locations, the only option at the time was a high-school in Fridley.

"In many ways" Peter said, "moving the church felt like a giant rollercoaster drop for us. Almost instantly, we lost 20% of our church. But, within one year, we were bursting at the seams again.

In 2009, after filling up 2 services at Fridley, we made the bold move to lease an Operation Center in Roseville and reorganize ourselves as a multi-site church.

Our Operation Center was a TV studio, coffee shop, we had an auditorium that seated 350 people, and our staff had space to work. Pastor Peter and Carolyn would preach their weekend message to a studio audience on Saturday nights. The next morning, they would jump back and forth between their campus at Fridley High School and their new expansion site at the University of Northwestern.

"At first," Peter said, "I was super leery about video-teaching models of church; yet, every week, we'd see a huge number of young people give their lives to Christ after watching my sermon video. The video campus quickly grew from 500 to over a thousand in a matter of months." And by 2011, Substance was once again forced to expand by launching its 4th campus at the high school theater in Spring Lake Park. 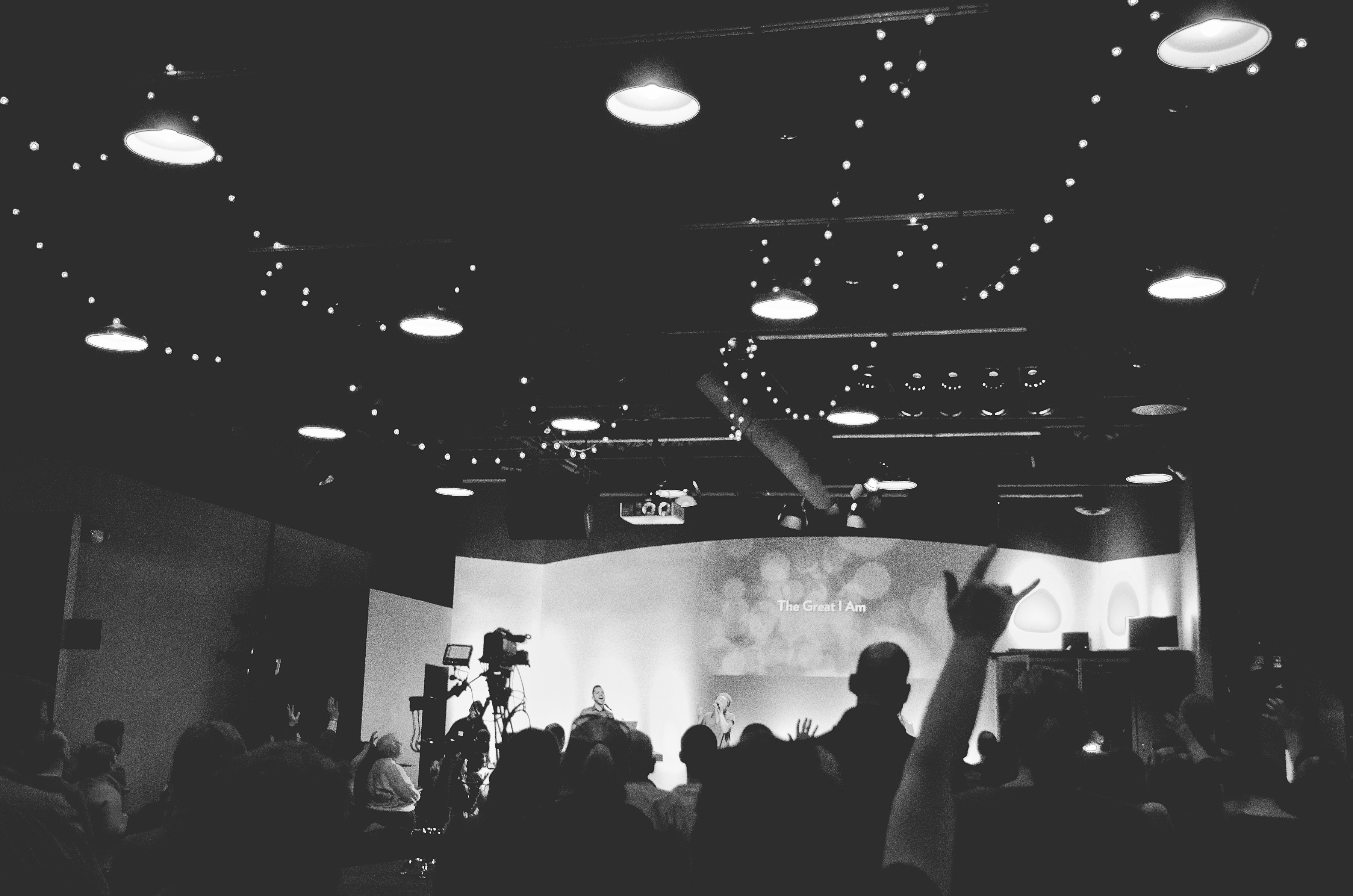 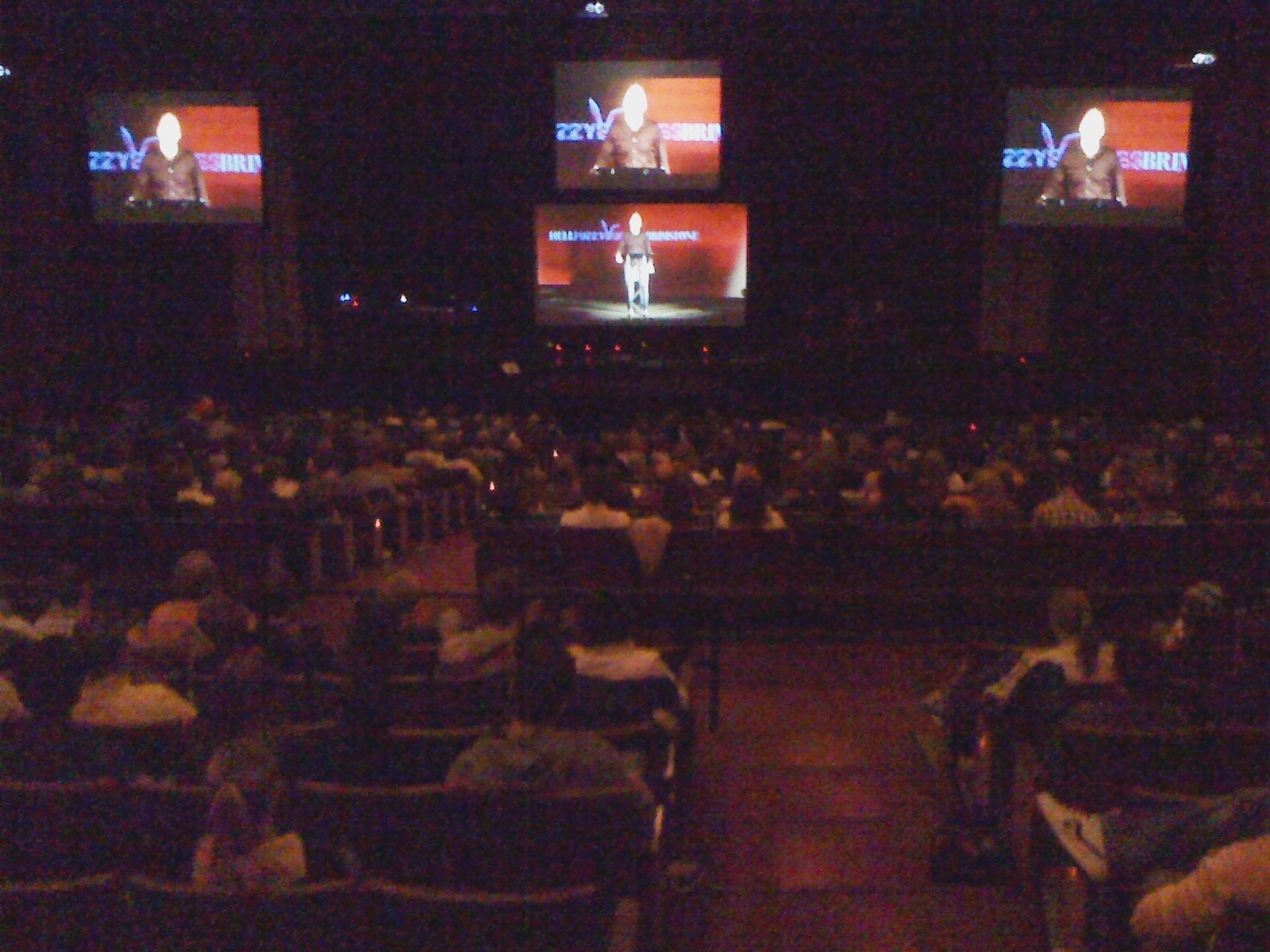 "It was a crazy season for us. I mean, we were doing 7 services in 4 locations - 3 of which were portable. We needed 600 volunteers to unload semi-trailers every Sunday. And when my first book, Pharisectomy, became a best seller, it seemed like everything was growing out of control. I started getting requests to preach all over the world. My young staff started getting job offers from big churches across the U.S. In some ways, by 2013, we reached our limits as a church. So, we finally made the decision to slow down our growth and focus on ‘growability’ (i.e., we needed to work on having deeper roots and better discipleship processes. We needed to save money, purchase buildings, and expand into a church that could reach all ages - not just unchurched 20-somethings)." 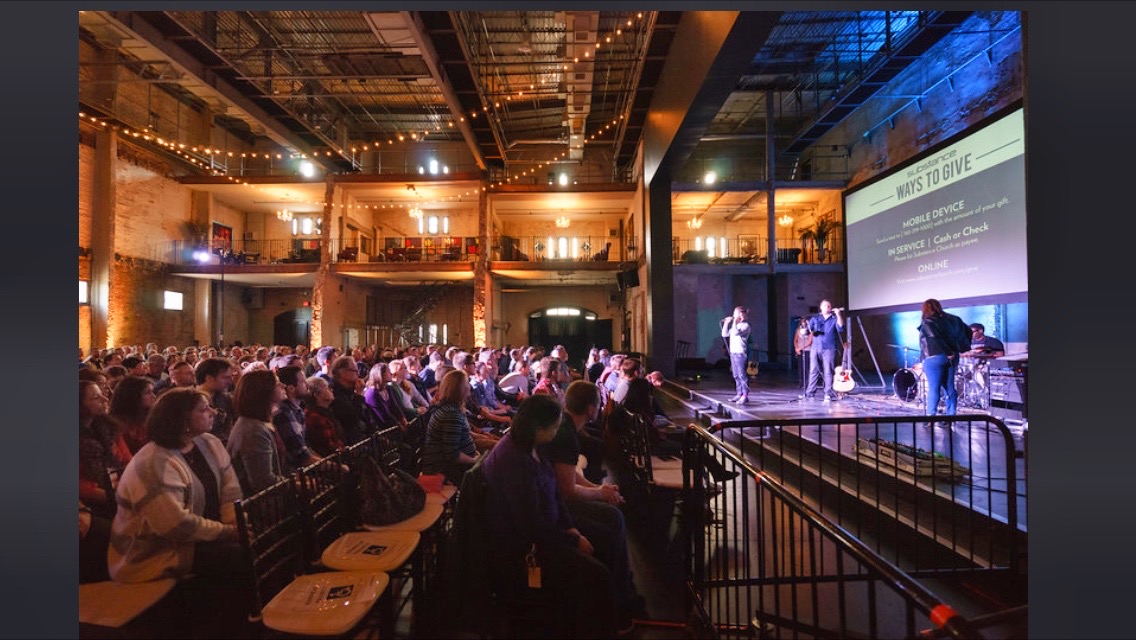 By Fall of 2015, Substance needed to vacate its University of Northwestern location.

"Honestly, 2015 was a rough year for us," Peter said. "Getting a permanent building for Substance felt like an impossible task. Yet amidst all of this, God was at work."

"At the time, our leaders were growing weary of being portable. We were burning out staff. And it felt like we were in an endless fundraising campaign for a building that would never happen. I think it was clear to all of us: we simply could not continue to do church like this." And that's when God worked a miracle.

"In the midst of all of my weariness, my 10-year-old daughter came up to me and said, 'Dad, I don't want you to be discouraged. In fact, I asked God, 'When is Substance going to get a building?' And he told me, 'By this time next Thursday, your dad is going to find the building for Substance and decide to go for it.' And she added, ‘In fact, God even showed me that it has a tall ceiling with a big balcony in it.’"

"Of course, when my daughter said this, I almost laughed out loud. After all, how in the world was I supposed to find a building with a balcony -- and then decide to buy it by the next Thursday? I mean, I don't even have any real estate meetings planned! And even more, I knew every available commercial property in the whole central metro area - and not one of them had a balcony.

Yet, right before I dismissed my daughter, The Bible verse from Genesis 18:14 exploded into my heart… It’s the story where Sarai laughed at God for promising them a baby. And God asked her: ‘Is anything too hard for God?’ So immediately, I took a deep breath and said, ‘God, if you want me to find a building with a balcony by this next Thursday, then so be it!’”

Well, the next several days passed and nothing was happening. And suddenly, with only two days left, Peter said, "I got a phone call from one of our staff members who had been facilitating many of our real estate meetings. He said, ‘Pastor, I totally forgot to tell you that some of the staff and I are going to be looking at a building in downtown Minneapolis today and I was wondering if you had time to come see it?’

‘A building for Substance?’ I said out loud. Of course, my daughter overheard it. And the moment I got off the phone she said: ‘Dad! You're going to look at a building, aren't you?’ with a smile on her face. And she repeated everything, ‘it's really big and beautiful. It has a balcony. And, oh yeah, I forgot to tell you… It's covered in red. And, the Lord told me, you'll know this building is the one when you look up and say ‘Wow!’’ And as my daughter told this to me, I thought: ‘Why would anyone look up and say 'Wow’?’ I mean, it simply didn't make sense to me."

"So, two hours later, I'm was downtown Minneapolis touring the historic Wesley building - one of the oldest buildings downtown - built in the late 1800's by a millionaire named Horatio Lillibridge. When I walked in, the building featured two different giant glass domes over the foyer and auditoriums, and when I saw them, the word just flew out of my mouth… ‘WOW!’ And the moment I heard myself say it, I literally freaked out thinking, ‘Oh my gosh! I just said 'Wow!'… Just like my daughter said!’ And I started taking dozens of pictures of the building."

"My daughter, right after she got out of school, decided to draw a picture of the vision that God gave her. And when I came home from work that day, she came running up to me with her picture saying, ‘Daddy, is this the building that you saw today? Because this is the building that God showed me.'

And when I looked at her picture, I completely freaked out again, because it was almost identical to the picture on my phone that I had taken only four hours earlier. Almost immediately, I started calling staff members and trustees to begin having the conversation about how we might purchase that building. 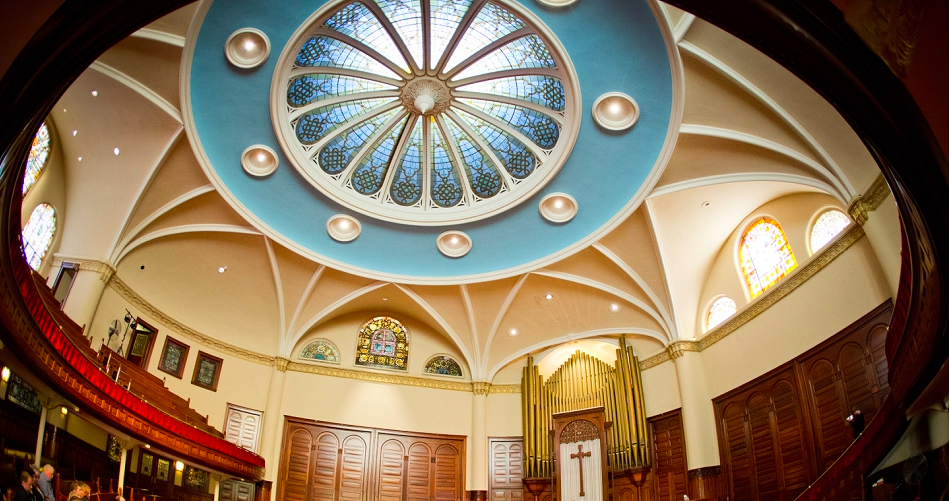 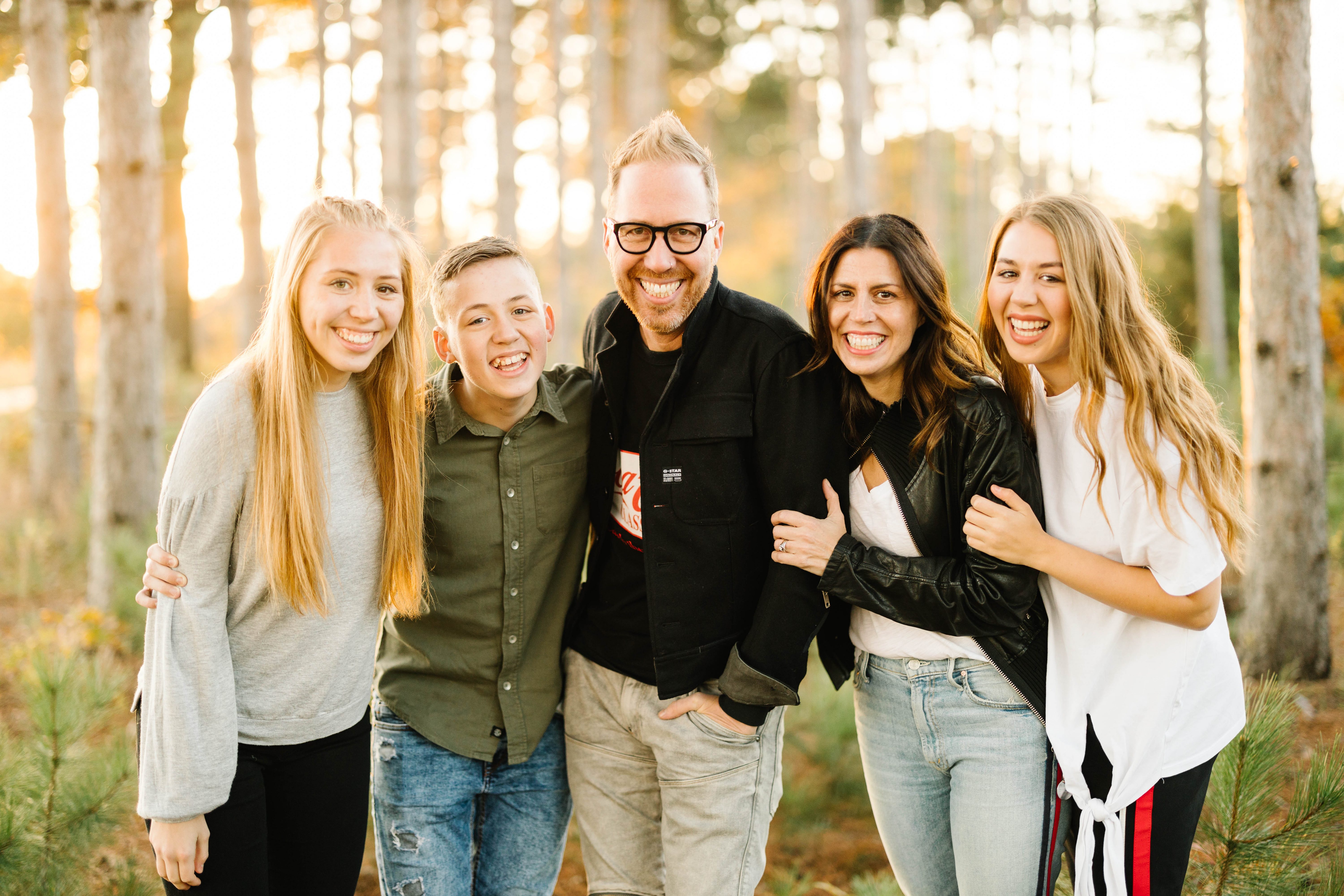 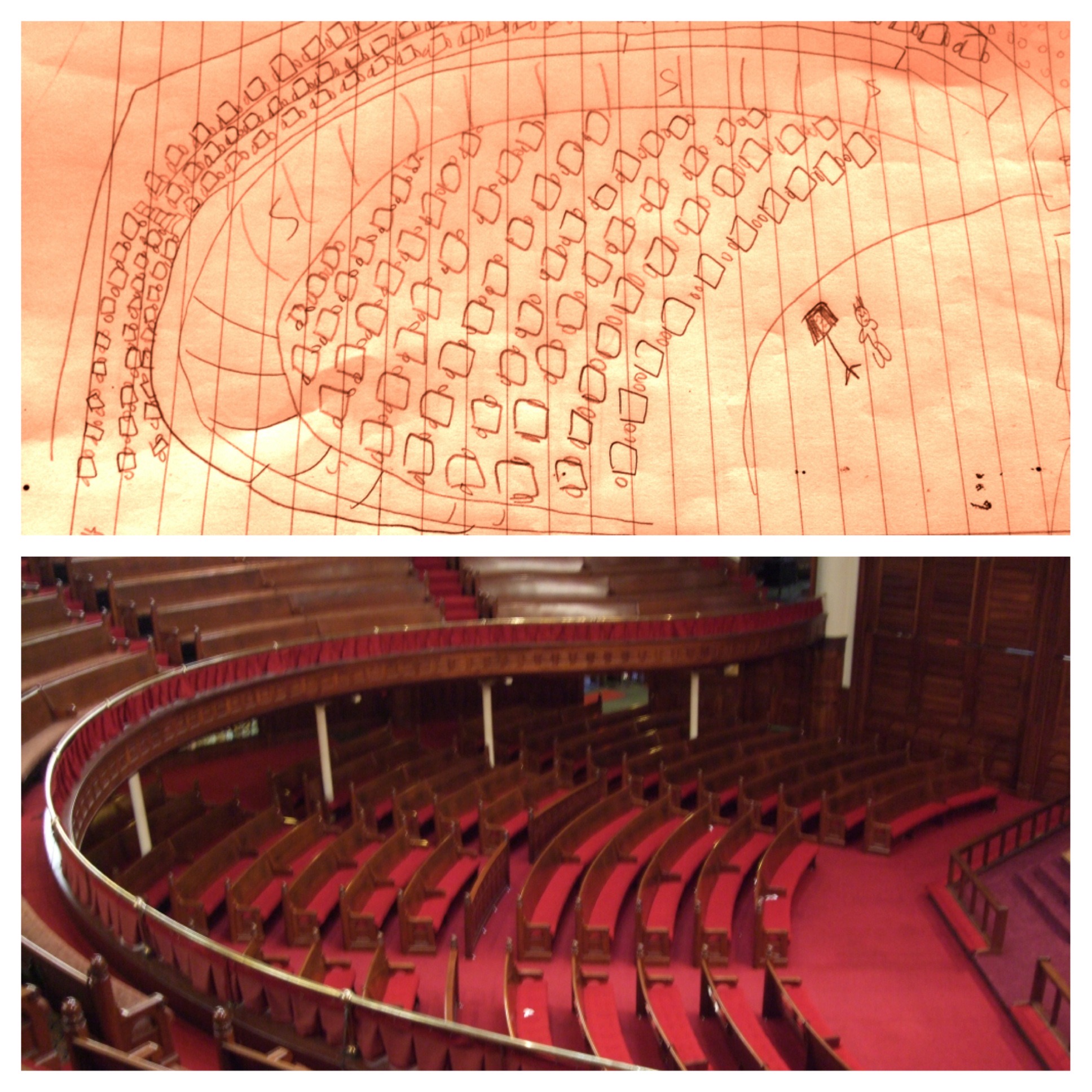 Keep in mind, at that very same time, we were trying to acquire a building in the city of Spring Lake Park. So the trustees were not exactly excited about my idea of pursuing two buildings at the exact same time. But if God was willing to give this undeniable vision to our child, then he also had the provision to make it happen.

So when the University of Northwestern needed us to move out, we had a major dilemma. Should we move our Northwestern campus downtown near, this Historic Wesley building? I mean, sure, God gave my daughter a pretty impressive vision. But, at that very same moment there were several wealthy real estate groups trying to buy Historic Wesley. And there was no way on earth we had the money to compete with them. But, despite this, with our faith fully activated, we eventually made the decision to move our Northwestern campus in the direction of Wesley. And in September 2015, the church officially launched Substance Downtown Minneapolis at Aria (in the North Loop).”

Over that following year, Substance made several attempts at purchasing historic Wesley with no success. And to make things more complicated, the church finally made progress on the Spring Lake Park property.

"So, as we put our nest egg towards the construction of our Northtown campus, it felt like my daughter's vision of Historic Wesley was fading away with every month. After all, what kind of bank would ever allow us to acquire two huge buildings in the same year?" But God's miracles were just getting started.

"Moving into our Northtown campus in 2016 was a big step for us," said Peter. "When you build a gorgeous mega-church building - mainly with cash - people could see, we are a legitimate family church who’s here to stay." Families started coming to Substance in droves. The church’s income continued to skyrocket. But, what about Substance Downtown?

"Amidst the chaos of 2016, a Methodist pastor named Paul Marzahn came to me with a brilliant idea. He knew it was next to impossible for any church to compete with all the real-estate developers seeking to end the church’s 125 year tradition at Historic Wesley. So, seizing upon his Methodist credentials, he offered to purchase Historic Wesley for us from the Methodist denomination before it went up for sale on the general market." And after a denominational vote, the impossible happened. By September 2016, Substance Downtown Minneapolis officially launched two services at Historic Wesley in a rent-to-own situation. 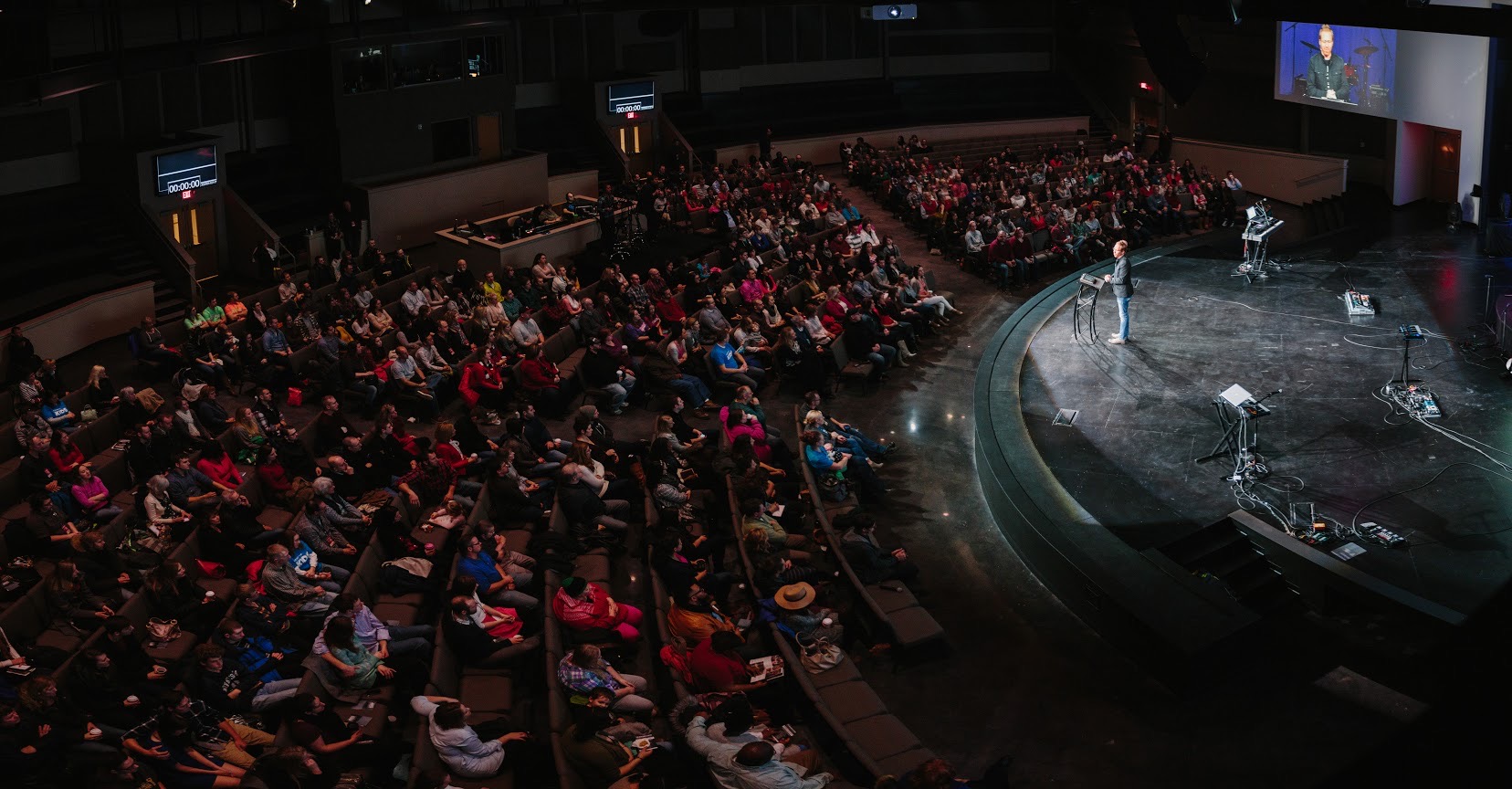 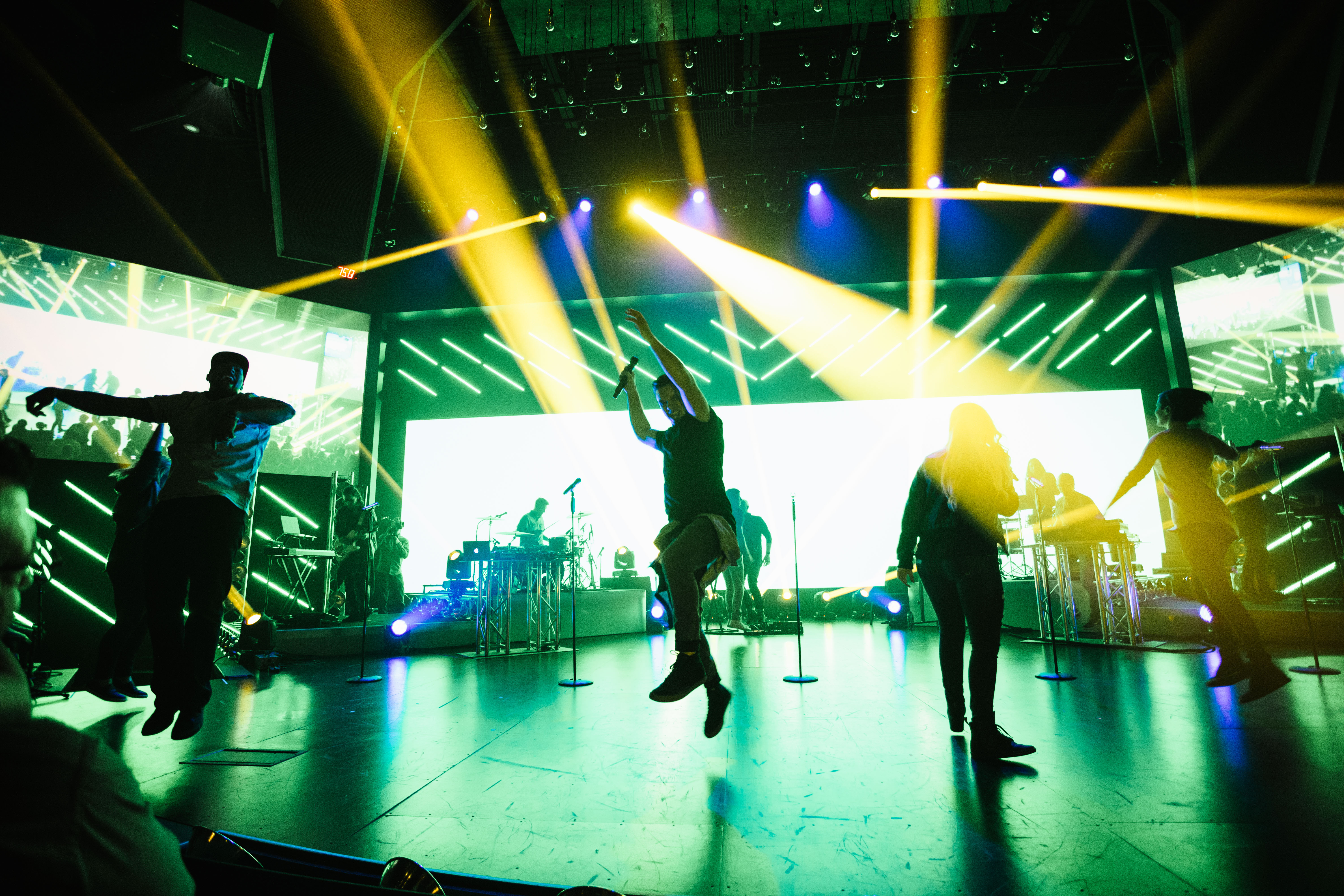 Finally, in 2017, the church launched its biggest outreach to date: Substance Studios. "For years, Substance has always had an easy time attracting artists, performers and filmmakers." So, Fall of 2017, Substance launched its first national worship band, Substance Input / Output - a congregational worship project that made it as high as #24 on the overall mainstream iTunes charts. And finally in Spring of 2018, Substance Studios launched an All DJ-led dance and rap music experience called Substance Variant - which has already started playing large festivals as far away as London.

"In many ways," Peter continued, "what I love about the Substance story is all of the miracles that made it happen. I mean, I wish I could say, 'I'm an amazing leader;' but, the truth is, God is the one who gets all of the credit. The church and I are simply along for the ride."

Even beyond our church, Substance helps lead a church planting organization called the ARC. As a part of the ARC lead team, Pastor Peter and Substance have played a role in launching over 800 churches around the world. It's not uncommon for Substance to have a half-dozen pastors visiting our campuses on any given weekend as we now help a new church launch every four to seven days (which, on average, launch with around 270 people).

So, if you're looking to be a part of something bigger than yourself, come join us. Or, if you're already committed to a church, be inspired: If God did it for us, he can certainly do it for you too.

But one thing is for sure: The demand to know Christ is greater than our capacity to keep up. So "ask the Lord of the harvest to send out harvest workers" (Mt. 9:37-38). And just as importantly, go forth and BE the harvest workers.

"Then the disciples went out and preached everywhere,

and the Lord worked with them

and confirmed his word by the signs that accompanied it."